Edit page History How do I edit this website?

The Arduino is a low cost programmable digital IO board. It has some digital inputs and digital outputs and can communicate with the computer through a serial interface (that is hidden in a USB connection). A very nice and simple programming language makes the Arduino very simple to program. The Micro-Manager interface to the Arduino consists of an Arduino program (the ‘firmware’) that you need to upload to the Arduino first. The current version of the Micro-Manager has facilities to use the Arduino as a shutter, and as a shutter that only opens when a TTL is set high (for instance, when the camera is exposing). Also, timed sequences of TTL output can be setup. There are also facilities for programmable analogue out, however, those need connection of a DA chip and requires constructions of a ‘daughterboard’/’shield’. 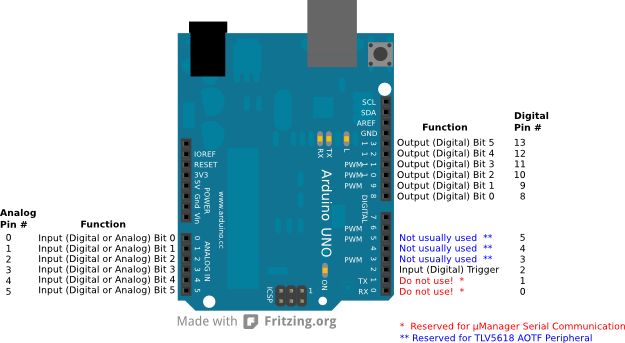 The Arduino IDE is required to upload the firmware to the Arduino. Once this step is done, it should no longer be required. Download and install the Arduino Software for your platform. Establish a connection with your Arduino using the instructions that come with the Arduino software (this includes installing a driver for the USB to serial adapter built into the Arduino.

For the Arduino Uno and similar boards, download the firmware source code. Bonno Meddens wrote compatible firmware for the ESP32, ItsyBitsy M4, and Teensy 3.x boards that can be found here. Copy the firmware into a blank Arduino Sketch window. Send to the Arduino, and your Arduino is programmed to work with Micro-Manager.

Add the Arduino-Hub. You may want to set the “Verbose” property of the port to 0 to avoid extensive logging of the communcation with the device, especially if you are using the input functionality (which queries the Arduino every second).

If you get the following error message when trying to Add the Arduino device in the Wizard: There are no unused ports available!, first check that the Arduino is connected to the computer. Also, under GNU/Linux systems,make sure that your user is in the dialout system group ([http://micro-manager.3463995.n2.nabble.com/Contol-Leica-DMI6000B-using-MM-on-Linux-td7582998.html see details]).

Arduino boards Duemilanove and newer feature an LED attached to pin 13. One can verify the Arduino is communicating by changing the state of pin 13 and verifying the LED changes. Setting pin 13 HIGH requires setting the Arduino-Switch-State to 32 (i.e. 2^5) in the Device/Property Browser. Toggle the Arduino-Shutter in the main MM window (the output pins will only go high when the Shutter Device is open, so you will need both the Shutter and State devices).

All possible combinations of digital outputs that can be set across pins 8 to 13 can be set by a single number from from 0 to 63, with 0 turning off all pins and 63 turning all pins on.

When a pin is configured in PWM mode (using the analogWrite Arduino command), the pin constantly switches between the binary HIGH and LOW values such that the temporal average of the signal is the required analog output: although the average of the voltage on a given pin is different from the HIGH and LOW values, the pin actually outputs a high frequency square wave, which can be detrimental to some devices that require a true analog signal. A way to smooth the PWM output to its average value is to use a RC circuit.

Furthermore, the default PWM frequency of the Arduino is relatively low: about 1 kHz. It is possible to go up to 30-60kHz.

One DAC chip is the Texas Instrument TLV5618. It is a 12 bit DAC. It is easy to handle and the Arduino firmware can talk natively to it through a builtin SPI protocol.

It can be wired as follows on pins 3, 4 and 5 of the Arduino and will require a few additional components: 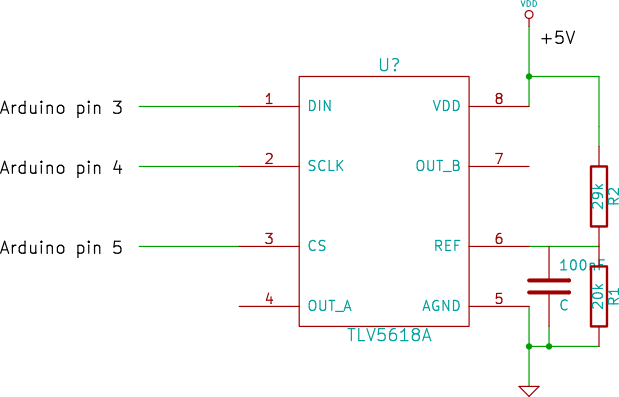 The current (as of Oct. 2016) implementation of the SPI interface in the Arduino firmware limits the speed of the DAC to approximately 1 kHz. However, it is possible to do better by using the builtin SPI interface of the Arduino. This can shrink the response down to 25 µs (40 kHz).

However, the SPI interface is only available on pins 10, 11, 13, which requires a little bit of reorganization of the Arduino code to work out-of-the box, and the analogueOutput function has to be re-written to use the SPI interface (see an example)

Additional information is available on those websites:

Linearity: If the voltage on the reference pin REF of the TLV5618 is properly set, the response to a ramp command is fairly linear (see image below). Note that the y scale is arbitrary and the x scale is ms. 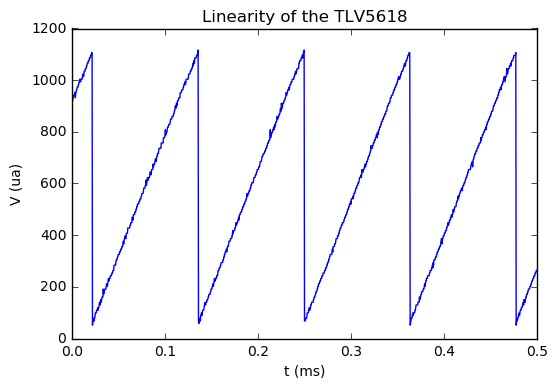